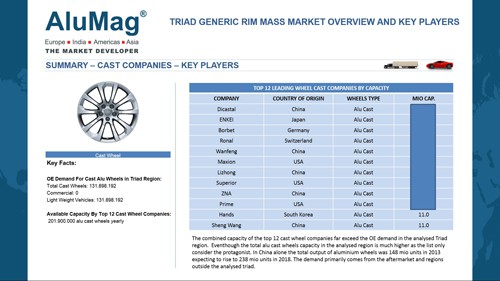 Worldwide the market for OE aluminium wheels is expected to grow with 0,91% in
the period 2014-2015 within light weight vehicles. From 44% in 2014 to 45% in
2015. In the period 2014-2029 a growth rate of 7% is expected which will bring the
worldwide penetration of OE aluminium wheels up to 51% in 2029. The highest
growth rates in the period 2014-2029 are expected in China (14%), Japan (13,5%)
and Central Europe (15%). Cast wheels will remain the preferred alloy wheel for
light weight vehicles while the penetration of forged wheels is expected to grow
moderate over the coming years. Today forged wheels are primarily used on high
end vehicles and sports cars, but the booming electric vehicle segment could
boost the penetration of forging wheels in the near future. On the other hand new
hybrid wheels to be launched by Maxion / Thyssen could become a threat to
forging wheels manufacturers.
The penetration of forged wheels within commercial vehicles (Medium – heavy
duty trucks, trailers and buses) is 13% on average in the analysed regions. Again
Nafta is the market with the highest penetration rate of forged wheels with 40%.
Trailers and trucks in Nafta has in general more axles compared to other regions,..